How We Compared Dawn Dish Soap Vs Palmolive Dish Soap 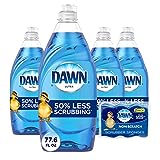 Goof Off Vs Goo Gone

Everyone wants sparkling cleans utensils. That’s why we go for the best option when it comes to dishwashing soaps. However, there is always more to look into apart from the results on the plates. For example, can you use your dish soap for other households cleaning projects, maybe cleaning your windows, cars, or pets?

The Cleaning King team has always been at the forefront to help you find out the best soaps, cleaning agents, and equipment for your projects. In this article, we compare two top brands, Dawn and Palmolive. They are amongst the top giants as far as dishwashing soap is concerned.

So we did some research looking into the building ingredients and determining the distinguishing factors. Here is a detailed explanation of which one is the better option and why.

Our Reviews - Dawn VS Palmolive

Dawn is a Procter & Gamble-owned American dishwashing brand. It came into the market in 1973 and gradually grew into its current status as the best-selling dishwashing liquid soap in the US. Besides dishwashing, dawning soaps are also effective in another project that involves removing grease from surfaces and wildlife rescue projects.

Have you ever wondered how they managed to clear the 11 million gallons of crude oil at Prince William Sound, Alaska, back in 1989? Yes, they used Dawn dish soap; that how effective and popular this brand is. The ingredients in the soap are so effective yet friendly that they removed all the grease without harming the birds.

Back to your kitchen; you can never go wrong with this dish soap. It has many traits that make it one of the best dish soaps. With only a few drops, you get the best results ever.

Everyone wants bubbles when washing dishes. You will easily achieve this by dropping just ½ cup of ultra-Dawn in ½ gallon of water. You can then add a tablespoon of white Karo syrup for more saturation.

Besides cleaning your utensils, Dawn can act as a multipurpose soap for other household duties. A drop of Dawn in 8 ounces of water is enough to clean your sinks, bathtubs, toilets, and bathroom counters. This soap also kills fleas, making it a more alternative to do shampoos.

With Dawn, you do not have to buy those harsh cleaners to unclog toilets. Instead, pouring a cup full of this dish soap directly into the toilet and allowing it to sit for about 15 minutes is enough. You only need to follow up with a bucket full of hot water. The triclosan ingredient in this soap fortifies it with anti-bacterial properties enabling it to fight even the most rigid germs in utensils, toilets, and surfaces.

What’s more? It also provides a safe way to protect your plants and repel ants. To use it for this purpose, mix a drop of the soap with water in a spray bottle. Then, mist the plants and spray on the ants-it eliminates the pests.

Several households used Dawn soap besides these. But, of course, you can always pick your favorite color, scent, and variety from your nearest grocery store. Another dominant ingredient in this dish soap is the fragrances that provide different colors to match your taste.

It is important to note that the brand commits to provide the most sustainable options for its customers even with all these varieties. They are using 35% post-consumer recycled content to make their clear bottles. There is also the Dawn® Powerwash Dish Spray comes in a refill bottle, so you do not have to liter your surroundings every time you finish the content.

Some dawn products contain methylisothiazolinone on the flip side, a highly corrosive chemical that is toxic when inhaled, ingested, or applied on the skin.

The bran is brand is also a bit pricey, making other alternatives more viable. 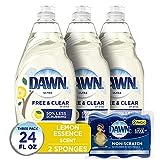 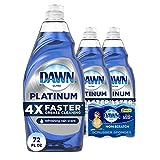 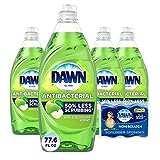 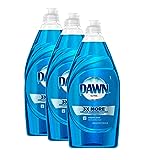 Windex Vs Glass Plus Vs Sprayway Vs Invisible Glass 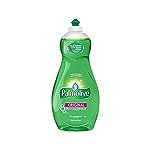 Palmolive is a famous American brand produced by Colgate-Palmolive.  It began as B.J. Johnson Soap Company but later changed its name due to a merger between Colgate and Palmolive-Peet Company.

The company sells associated products across the world. Some of the most common items from its long line include soap, shampoo, dishwashing liquid, body wash, liquid hand wash, and hair conditioners.

Palmolive dish soap contains a formula designed to act on grease and grime while remaining soft on your skin. The phosphate-free dishwashing soap is the best choice for cleaning even the most difficult places to reach.

The active ingredient in this product is triclosan, an organic compound that contains carbon that is common in most liquid soaps. It is a chemical compound, not a natural compound, from an animal or plant source.

Triclosan has anti-bacterial properties making it very difficult to wash off. It takes time to degrade, so Palmolive dishwashing soap is an effective weapon against germs- a single was protects your utensils for a very long time, even after rinsing.

However, Palmolive is switched most of its liquid dishwashing soaps to anti-bacterial dishwashing liquids, moving its statutory category to pesticides from drug-and-cosmetics. It also changed its active ingredients from triclosan to lactic acid. As a hand wash, the cosmetic ingredient labeling was more specific as an EPA registered disinfectant.

Palmolive also has ammonium laureth sulfate and lauryl poly glucose inactive ingredients. The former is a mild emulsifier present in most household soaps, while the latter comes from corn and helps spread the lather over surfaces.

Other ingredients here include sodium chloride, commonly known as salt, Pentasodium, Magnesium, and sodium bisulfite. Pentasodium acts as a chelating agent that prevents dyes and perfumes from mixing with metallic components in the soap.

The Palmolive dish soap has a pleasant aroma. This, together with its powerful cleansing ingredients, makes it a more affordable, readily available alternative to pet shampoo. In addition, the formula effectively cuts grease on dishes and may be useful in cutting excess oil on your pet’s coat.

On the flip side, Palmolive dish soap contains SD Alcohol 3A, grain alcohol considered potentially toxic to humans. It also has sodium xylenol sulfonate, a chemical thought to be carcinogenic and may cause diarrhea, vomiting, and irritation of the eye. Triclosan, when mixed with tap water, may also be carcinogenic.

Palmolive cones in several different varieties, including the following: 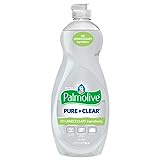 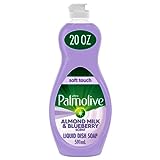 The Main Differences between Dawn and Palmolive Dish Soaps

Of late, each of these brands has been coming in different varieties.  A few ideas of their formulas are available from any patents on the labels. Also, most versions have skin-benefiting claims introducing the statutorily “cosmetics” factor with ingredient labeling more specific than the brands commonly use.

Dawn dishwashing soap is a universal and efficient utensil cleaning agent. Besides dishwashing, it is an efficient soap in cleaning the toilet, washing cars, and the sink areas.

It is more concentrated, helping you clean more dishes with little soap, meaning that you will waste fewer plastic bottles. The brand is also environmentally cautious with its packaging and use of Biodegradable Surfactants. In addition, they have refillable bottle refillable bottles, so you do not have to throw away the container.

Even with methylisothiazolinone, Dawn is a bit softer and friendlier to the skin. Dawn is also rich in anti-bacterial properties that will protect you, your utensils, and surfaces away from germs and related illnesses.

Palmolive is not as concentrated as Dawn, but the fragrance is a bit heavy. So while it may be a preferred option for some, it may not be your cup of tea if you have solid scents and allergies. On the other hand, Dawn dish soap gives you a wide variety to choose from, mostly with original scents.

The supper concentrated formula may be tough on the grease but leave your skin soft. It is also an excellent option for other purposes, especially pet cleaning. On the other hand, Dawn dish soap is proven safe to use in plants and animals without any side effects.

While both are effective against grease, Palmolive is a bit thin, so you will need more soap than when using Dawn. So while you might want to go for the less pricey option, it would be wise if you considered the value in quantity.

Both brands have tomes of varieties to choose from, depending on the fragrance, color, and even the packaging.  This gives you the option to make a more personalized decision on what suits your kitchen and budget better.

They are also more versatile, so you can use them for purposes other than dishwashing. However, when doing this, we recommend that you check on the potential dangers.

Both products are for external use only and may have server consequences if inhaled, or consumed so you should keep them out of reach of children. In case of eye contact or any other accidents, rinse thoroughly with clean water. If swallowed, the victim should drink a lot of water to dilute.

Both soaps have anti-bacterial properties to help you keep your household away from bacteria and germs. The protection goes a long way and several rinses.

Both soaps have toxic substances that may expose your family to health complications.

While we have not mentioned it anywhere in this article, Palmolive dish soap is generally cheaper to buy than Dawn. However, it is essential to note that Dawn dish soap is a bit thicker, and you might need fewer drops when cleaning. So the initial price may be high, but it may be economical in the long run, especially when you intend to do many dishes. So economy comes into perspective here.

They both have anti-bacterial properties, but the protective effect from Dawn lasts longer than that of Palmolive. Even more, Dawn has fewer side effects on the skin, surfaces, and other areas than Palmolive. For example, Dawn is only potentially dangerous when inhaled. On the other hand, Palmolive (especially the original) is more aggressive, especially on the skin with prolonged exposure. In addition, continuous and prolonged usage may deprive the skin of the natural oil it needs to thrive and shine.

Suppose Palmolive ever decides to make a skin-softening claim, which maybe because of the inclusion of lactic acid as part of alpha-hydroxy acids. In that case, the brand will go back to the CTFA/INCI cosmetic ingredient labeling.

There is more to look for in dishwashing soap. These two brands produce a neck to neck competitions regarding the ingredients, formula, and effectiveness. If you want something that is cheap on the supermarket shelves, go for Palmolive. However we recommend Dawn dish soap because of its economic value, it may be expensive to buy but saves you a lot of money in the long run.

Pine-Sol Vs Lysol Vs Seventh Generation