The Cleaning King Website Is Supported By Its’ Readers, This Page Contains Affiliate Links From Which We May Earn A Commission At No Extra Cost To Readers. Click Here For Full Disclosure.
Best Environmental Option
Sale

Degreasers are cleaning agents used to dissolve oil, grease from surfaces. Degreasers contain chemical solvents that help cause a chemical change on the surfaces making the grease or oil easier to remove.

There are three main types of degreasers.

The first is the natural degreasers, which are the common ones you see in your houses, care homes, hospitals, schools, and kitchen.

The natural degreasers are not as strong as the other types of degreasers. It’s not commonly used for industrial applications.

It is stronger than the natural degreasers and is used for industrial purposes where heavy-duty grease and oil remover are needed. It is used in sectors like automobile, marine, aerospace, oil and gas, rail, etc., to name a few.

The chemicals found in the solvent-based degreasers are very strong and can have a negative impact on the environment. We only advise the use of these types of degreasers if you have a suitable disposal facility.

They are more friendly to the environment, so they are preferred to solvent-based degreasers for industrial sectors that deal with consumables. In the industries today, the degreasers play a very important role in maintaining the smooth running of mechanical parts that deal with a lot of grease accumulation, stains, and grimes. 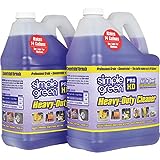 Zep industrial purple degreaser is a popular industrial degreaser known for its powerful formulae designed to help you remove all serious grease and oil cases. It is one of the favorites of professionals in degreasing their machineries, equipment, and for commercial uses.

It is designed by Zep Inc. which is a top chemical product manufacturer. Zep inc is known for producing powerful degreasers, detergents, lubricants, floor finishes, adhesives, polishes pest control products, and a lot of other products

Zep industrial purple degreaser is one of the best Degreaser for all-round industrial degreasing purposes. However, it can be a little too harsh to the environment, so professionals should only use it.

It has a shop grade formula that easily dissolves tar, heavy grease, and oil. It also removes adhesives and paints. Also, it dissolves soils so they can easily be wiped or rinsed away.

It is used for industrial purposes and can be used in heavy machineries, engine parts, shop floors, work surfaces, construction equipment, etc.

Zep is based in the USA and is trusted by professionals for more than 80 years for their degreasing activities.

The WD-40 industrial degreasers is a great grease cleaner. It is ideal for automotive parts, tools, and floors industrial machines and can also be used for commercial appliances.

WD-40 is one of the finest degreaser companies based in San Diego, California, USA. With over 65 active years in the industry. They have a range of awesome products to help protect your equipment against and to remove rust.

The WD-40 specialist industrial strength cleaner and degreasers 24 OZ (non-aerosol trigger) is a water-based non-flammable solvent, uniquely engineered to be a powerful degreaser that can be used for different kinds of industrial uses. It is also environmentally friendly (remember what we said about water-based solvent degreasers).

WD-40 specialist industrial strength cleaner and degreasers is a perfect degreaser for your industrial purposes. It doesn’t pose an environmental risk as its biodegradable formula meets the US EPA safer choice standard. It is also NSF registered A1, A2, A4, A8 B1.

WD-40 specialist industrial-strength cleaner and degreasers have a biodegradable solvent formula that has a shutter trigger with a very convenient refill port.

It is safe to use on multiple surfaces while preventing flash rust, corrosion of metals like aluminum, copper, etc. The formula also prevents glasses from etching.

The WD-40 specialist industrial strength cleaner and degreasers are non-flammable, non-abrasive. It is not corrosive, and it has a low odor formula that makes it ideal for food processing plants.

Aluma bright aluminum cleaner and brightener is a perfect heavy-duty degreaser and cleaner for industrial use. Although it is not ideal for polished aluminum, the Degreaser is ideal for all kinds of other aluminum surfaces, which is one of the most used metals for industrial machines.

It quickly and efficiently removes any form of grease and grime from machinery and equipment without discoloring it.

Aluma bright aluminum cleaner is recommended for commercial and industrial purposes and would tackle the toughest cleaning jobs.

It has a highly concentrated, non-fuming detergent designed to effectively and easily remove the worst grease and grime combinations.

It is made in the USA with a 100% money-back guarantee.

Best industrial degreaser – easiest to use

It is designed with perfection in mind. It is ideal for industrial, transportation, and general plant maintenance, cleaning, and degreasing operations.

Compared to other types of degreasers solvents like the aromatic, chlorinated, aliphatic, fluorocarbon, alkaline, acidic, or petroleum-based solvents, the citrol concentrate is better in terms of environmental friendliness. At the same time, it is also effective in its degreasing properties.

Citrol can be trusted to give you the best of degreasing services without harming the environment.

Its effective and powerful non-corrosive formula is designed and formulated by Sunshine makers inc, an American cleaning product manufacturing company known for delivering quality products all the time.

Simple green SMP213421 Pro Hd heavy-duty cleaner is the ideal Degreaser for the automobile industry. It is commonly used in automobile plants.

Its degreasing formula is ideal for degreasing tools, equipment, and vehicles. It is one of the most used degreasers in the automobile industry, commonly used for automotive fabrics.

Its formula is concentrated at 1:14, and it’s cost-effective.

It can also be diluted and used in pressure washers, carpet cleaners, and floor scrubbers.

You need to look out for some factors when picking an industrial degreaser for removing oil, oxides, grease, and handling contaminations on equipment and assemblies. Assemblies like the pneumatic and hydraulic assemblies, generators, electric motors, bearing chains pulleys, brake springs flywheels, spring, etc.

Some of the factors you should look out for include volatility, dielectric strength, rubber and plastic compatibility, toxicity, other environmental issues, etc.

When considering solvent-based degreaser and mixed solvent degreasers, there is always a tendency that they contain alcohols and hydrocarbon solvents, which are very flammable.

The Degreaser containing components like this might be cheap and ideal for your applicators. Still, it can be very dangerous to use it in spaces that are not well ventilated or used beside open fire.

Depending on where you want to use these degreasers, you need to consider the volatility of the degreasers.

The ideal solution is to avoid flammable Degreaser, use non-flammable degreasers, which are generally more expensive, but better in preventing fire accidents while using degreasers. An example is the High flash point solvents with low flammability and would not combust in normal ambient temperatures.

Degreasing operation is not done on metals alone. Other materials also need degreasing from time to time. Such material is plastic and rubber, which are also heavily used in industries.

Suppose you are going to be using the degreasers on plastics or rubber components. In that case, you should try out the Degreaser and know if it has plastic and rubber compatibility before it destroys your material.

By dielectric strength, we are talking about the Degreaser’s property that allows it to withstand electric currents, more like its electrical insulating property.

The more the dielectric strength, the less likely of electric current passing through the Degreaser. A lot of time, degreasers are used on industrial machines that are still powered or working.

In many plants, machines are rarely switched off. When degreasing the spill or grease deposits in the machine, electric currents might pass through the Degreaser and electrocute the user due to the machine’s electric field and the Degreaser’s low dielectric strength.

It is advisable that if you are going to be degreasing working machines. It would be best if you used degreasers with high dielectric strength to prevent any form of electrocution.

Many chemicals come together to give degreasers awesome cleaning abilities, but some of these components are highly toxic and have harmful effects on the health of users.

These chemicals can cause detrimental effects on users’ health. There are several examples of court cases where workers complain of health issues like headaches, dizziness, and total loss of body control after exposure to such chemicals.

When choosing a degreaser, you should make sure they have no toxic chemicals in their makeup.

Apart from toxicity, there are other negative effects degreasers can cause to the environment. Some volatile and organic compounds known as VOC solvents can cause smog’s, while some other solvents have huge global warming potential (GWP).

It is advised you stay for Degreaser that has these qualities. Some bodies regulate the use of Degreasers and prevent degreasers with VOC solvents or GWP from entering the market.

They include the California air review board (CARB) and some industrial special relation boards. So in picking a degreaser, it is okay to check if it complies with the boards’ rules and regulations.

Our teams choice for the best industrial degreaser goes to the ZEP industrial purple degreaser. This heavy duty cleanser can handle any job you throw at it. It does contain industrial grade chemicals however, so take care not to get it on your skin or in your eyes. You will also need to consider safe disposal methods. Can degreasers damage the skin?

Yes, degreasers can damage your skin if it is the kind of degreasers that contains corrosive properties. One reason it is advised that only professionals should use corrosive Degreaser as it is most common with heavy-duty degreasers with a high PH. It can cause chemical skin burn and can even cause permanent damage to the eyes.

What are degreasers used for?

Degreasers are used to prevent corrosion, slipping hazards, overheating, and increasing electrical resistance, among other uses. It works by cleaning and dissolving dust, dirt, grease, and oxidation contamination on surfaces. It is also commonly used in plants for downstream processes like painting or plating.

Some degreasers are toxic, especially those containing compounds like trichloroethylene (TCE), N-propyl bromide, etc. But many degreasers in the market avoid these compounds and have low toxicity.

Are degreasers acidic or alkaline?

Make the World a Cleaner Place